My boyfriend got it for me. Bet he's really cute. Nick turned to see what his boyfriend was looking at and was met by nothing but a giant pile of snow, probably put there by a plow.

Not a footprint to be seen. Nick watched the blonde for a few seconds, admiring his voice, before, once again, growing tired of the song. Come on. Haven't I suffered through this song enough already?

Nothing Like You've Ever Known (from Tell Me On A Sunday)

We just came from the sing a long for christ's sake! Once it became clear that Jeff was going to continue singing until he was finished Nick realized he had three options. One leave without his boyfriend.

Two get video footage of this. Or three get up on the pile of ice and sing along. None of the options sounded too promising and Nick was sure that they would all end in disaster.

But then Jeff began singing verse two. Nick could almost see the white walls appear out of the ground around his boyfriend. As Jeff began bridge Nick began to walk back over to his snow pile, hoping beyond hope that the blonde would get off the snow bank once he was done. You have to sing the last chorus with me!

Nothing Like You've Ever Known (from Tell Me on a Sunday) by A.L. Webber on MusicaNeo

Let the storm rage on! The cold never bothered me anyway! Nick looked up at Jeff as the two finished the song, feeling the sudden urge to climb up on the snow bank and kiss the blonde.

Jeff smiled down at him and, as if reading his mind, held out his hand. It was at that point that the cheering erupted. 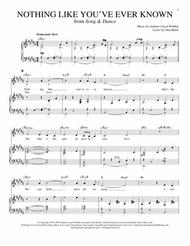 Quickly looking over Nick saw Trent, Thad, and David sitting in their car to the left of them. Startled by the sudden interruption Jeff turned and stumbled.


In slow motion Nick saw the blonde lose his footing and begin to fall off the snow pile. As quickly as he could Nick held out his arms, letting Jeff fall safely into them instead of onto the cold, hard concrete.

Jeff smiled, brushed off his coat, and looked over at Nick. Put On Your Sunday Clothes It Only Takes A Moment Joseph's Lullaby Unexpected Song Only You Mary, Did You Know? With You I'm Born Again Reflection Every Time We Say Goodbye Any Dream Will Do All Is Well Not Too Far From Here What'll I Do Gethsemane You'll Be In My Heart Colors Of The Wind When She Loved Me The Story of My Life If I Loved You O Holy Night